The creators of PlayerUnknown’s BattleGrounds (PUBG) have filed a major lawsuit against Epic Games, the creators of Fortnite, citing apparent copyright infringement from Epic Games.

Why is PUBG suing Fortnite?

The news came a week after PUBG sued NetEase over similar copyright issues concerning the latter’s games, Rules of Survival and Knives Out. PUBG’s newest lawsuit claims Fortnite copies aspects of their game, including user interface and design of the game’s weapons.

For anyone out of the loop of the gaming world, PUBG and Fortnite have stormed the video gaming market in recent months, with both games breaking industry records for popularity and becoming gaming titans in nearly no time at all. Chinese investment firm Tencent Holdings Ltd backs both games, and both games are run on Unreal Engine 3, which is owned by Fortnite’s parent company Epic Games.

Comparison of PUBG and Fortnite

So just how similar are these games? We’ve compared the two games using three key factors and analysed the difference.

For the visual aspect, there are some obvious differences between these two games. PUBG’s look is gritty and realistic, and from still images from the game, the game could arguably be difficult to differentiate from other gritty, realistic shooting games. The colours are mostly earthy tones, the weapons offered in the game look almost identical to their real-life counterparts, and the clothing in the game, found by looting buildings, is about what you’d expect to find in a hurriedly-abandoned house. Since the game is designed to be suspenseful, the battle worn, realistic look is very appropriate. 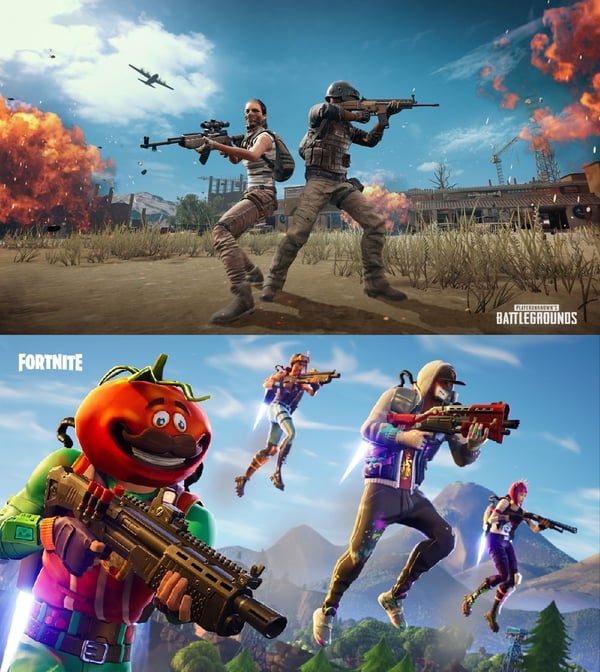 Conversely, Fortnite’s design appears very stylised; it does nothing to hide the fact it’s computer-generated, rather it embraces it. The colours are incredibly vibrant, the weapons are exaggerated sometimes to the point of ridiculousness (they released a pumpkin bazooka for Halloween last year), and the overall design is very cartoon-like.

As the game is designed to look realistic, so too is this reflected in the gameplay of PUBG. At its core, it’s a barebones shooter, with some light weapon modification and scavenging for supplies. Tactical positioning, stealth and marksmanship are the important elements to success in PUBG, as the game tries to present somewhat realistic combat situations.

Fortnite’s gameplay offers something different to classic shooters, taking inspiration from other recent developments in gaming. Players start with a pickaxe, and are able to break down the world around them, collect the raw materials, and use them to build new objects on the fly. This could be inspired by another huge modern game, Minecraft, which currently sits as the 2nd most sold video game of all time.

There are, however, many similarities. Both games begin by travelling high over the island in some flying vehicle, and players jump out when they want. The menus accessed between games seem to be functionally identical, and both games contain elements of looting and searching for useful objects around the map.

Both games feature a battle royale game mode, meaning players are put onto a huge playable map, and must survive against 99 other players, while the play area continually shrinks in size, forcing players into closer proximity as the match winds down. It is likely that this is a large part of PUBG’s complaint, since it forms the foundation of the entire game and only small variations on the battle royale system are available.

While Fortnite does offer a battle royale mode, it was introduced after the release of the initial game, and was likely implemented to capitalise on the growing success of the battle royale format. Furthermore, the game offers a number of game modes, including missions involving fighting off monsters, playground mode and a series of time-limited play options, further distancing itself from PUBG.

Is PUBG inspired by Battle Royale?

The details of the lawsuit have not yet been made public, but if PUBG is basing their case  on their rights to the battle royale game style, it’s worth taking a look at the history of the concept to be able to discuss PUBG’s claim.

One likely source of inspiration comes from the 2000 Japanese movie Battle Royale, in which a group of classmates are brought to an island by a fictional, totalitarian Japan, and are forced into a huge fight to the death. Many aspects of the film appear to have parallels in  PUBG, including having the participants be randomly allocated weapons and tools, with the film’s protagonist receiving the lid to a cooking pot. The latter is interesting, since PUBG’s previous lawsuits against Rules of Survival and Knives Out claim the use of a frying pan as a weapon as derivative of PUBG´s own game design.

The concept of having areas of the map become “kill zones” also feature in the movie. In the game, the system uses a shrinking circle to force players closer together. However, the creators of PUBG have stated they preferred Battle Royale’s system of square sections of the map alternating between safe and dangerous, but were prevented from doing so due to technical restrictions.

It could be argued that the idea that PUBG was innovative within the gaming industry isn’t completely accurate; in 2012 a mod for Minecraft based on The Hunger Games, another work which heavily features the battle royale structure, was released and found great popularity. The concept of the game is very similar: a large group of players are put onto an island, where they scavenge for items and fight each other until a single survivor remains. 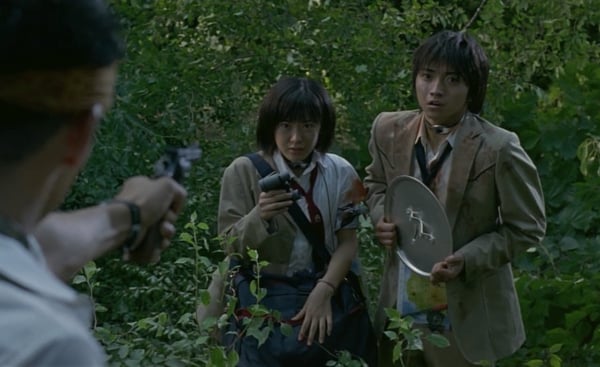 In fact, this is not even the first battle royale game made by PUBG creator Brendan Greene, who is also known as PlayerUnknown. Greene rose to prominence in the gaming industry with his work on DayZ, a mod for ARMA 2, which shares many gameplay elements with PUBG.

In an industry as competitive as video gaming, with high development costs and the ubiquity of pirated copies of games available online., it should be no surprise that lawsuits are a relatively common occurrence. A single successful title can boost an entire company’s profile, opening the door for downloadable content (DLC), sequel games and spin-offs. So protection of IP, be that specific game mechanics, character designs, story elements or whatever the company may value highly, is extremely important to the makers of video games. So let’s look at some examples from the past, and how they relate to this case.

In 1979, Atari released Asteroids, a game now widely viewed as a classic of its time, in which the player controls a spaceship and must shoot and avoid the rocks flying around the screen. Soon after Asteroids’ release, the market saw the appearance of a number of very similar games, including Amusement World’s Meteors. 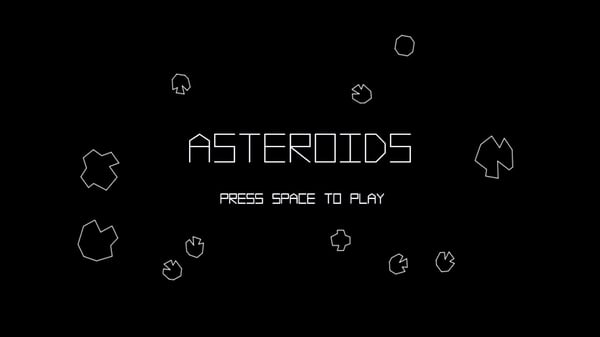 Atari launched a lawsuit against Amusement World, citing copyright infringement regarding Meteors’ blatant similarity to their own Asteroids. While the court recognised a lot of similarities, 22 in total, between the games, they ultimately sided in Amusement World’s defense. The gist of the reasoning was that simply copying an idea for a videogame is not enough to constitute copyright infringement. This case became the foundation of the protection of genres within video gaming, allowing the reproduction of popular game modes across companies.

Creators of the massively popular 2012’s Candy Crush Saga, King, received a lot of flack when they were granted trademarks for the words candy and saga, and showed no hesitation protecting their ownership of the words in court. One especially notorious case was against the game The Banner Saga. While the game certainly used the protected “saga”, the viking-themed RPG appeared to have little in common with the Candy Crush Saga’s brightly-coloured puzzle game. 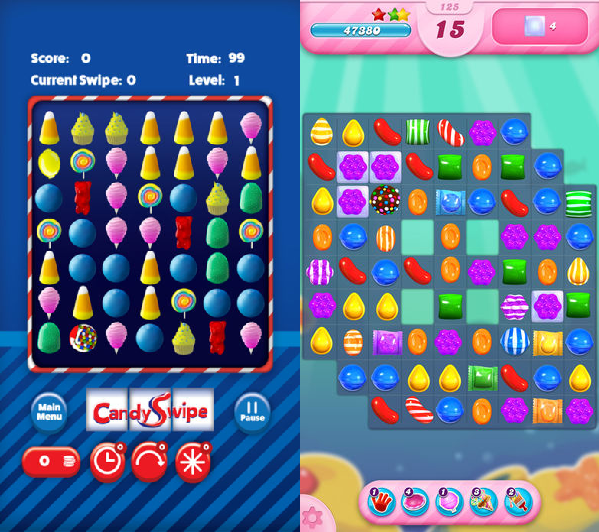 What’s worse was the lawsuit King filed against CandySwipe in 2014. The similarities between the two games are unquestionable, and not just those stemming from the genre of the game, but stylistic attributes had clearly been copied from the original, as well as the crux of the lawsuit, the use of the word “candy”. The problem was that CandySwipe predated Candy Crush Saga by two years, the former having been released in 2010. So King was suing a company for trademark infringement which had been using said trademark for years before King launched their game. Both lawsuits were eventually settled amicably out of court.

The PUBG case is not the first legal trouble that Epic Games’s Unreal Engine has been embroiled in. Canadian video game developer Silicon Knights, which was paying licensing fees to use Unreal Engine, launched a suit against Epic Games in 2007. According to Silicon Knights, Epic Games was sabotaging their games using Unreal Engine by intentionally delaying the engine’s release, and by providing insufficient documentation when it was released, all done in order to boost the sales of Epic Games’ own game, Gears of War.

Epic Games’s response was definitive. They discovered Silicon Knights had copies thousands of lines of coding from Unreal Engine, so Epic Games essentially sued them into bankruptcy and forced them to destroy any unsold games which was using their game engine. Since PUBG also relies on Unreal Engine, it would be in their best interest to maintain healthy relations between the companies.

If the case comes down to a problem with the game mode, the battle royale, PUBG will likely be out of luck. The Asteroids/Meteors case indicates  that there may be a precedent that a genre can’t be copyrighted. Game studios are allowed to imitate other games, as long they add their own spin to the new product. This aspect is known as transformativeness, which is the property of a derivative work which separates it from the original piece by adding new meaning or expression. It’s an important distinction, because without it, there may only be a very limited number of first-person shooters, role-playing games, racing games, and so on. Since Fortnite is expressing the battle royale formula in a seemingly different way to PUBG, it is likely that it may be deemed transformative. Add this to the clearly distinct designs of the weapons, and PUBG’s case may be more complex than they were hoping for.

Game over? How video game piracy protection is failing