A look into Red Points’ research on fake designer clothes for sale online, as well as consumer opinion and shopping behavior.

The danger that counterfeiting poses to designer clothing brands is unquestionable, and for brands - unignorable. Many will remember the hit Burberry took to its reputation and demand in the 2000s when widespread counterfeiting replaced with the brand’s association with A-list celebrities with “chavs”, negatively affecting the fashion house’s sales and brand value.

The research shows that designer clothing consumers have strongly negative responses when presented with counterfeiting:

This comes as a somewhat surprising discovery, considering the previous research into personality traits and counterfeiting, which suggests that the prestige effects of cheap fake designer clothes offsets the desire to own authentic products. 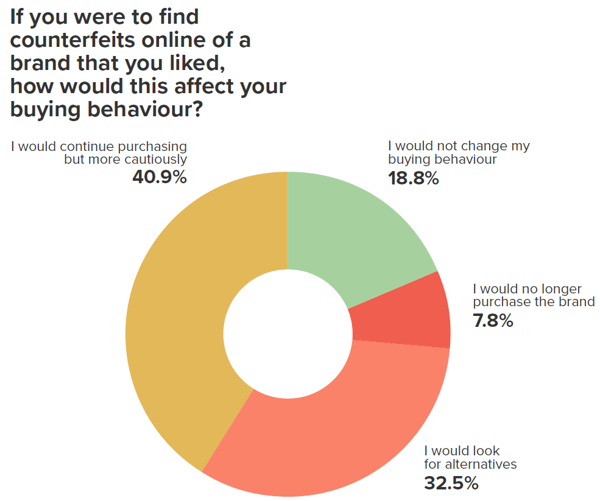 Research participants were asked how they would react to receiving a counterfeit item they’d bought from ecommerce, thinking the purchase was for an authentic good. Many consumers do show a sensible reaction to the situation, with the most common response being to request a refund from the ecommerce seller, with over 40% saying they’d submit a complaint to the platform.

However, there are two common responses which should concern brands:

Both of these responses could have huge implications for brands. With nearly half of respondents saying they’d warn their friends and family. The power of word of mouth is no secret. If half of your customers that accidentally buy a fake start talking about your counterfeiting woes - and more than a fifth of them doing so publicly on social media - this is a problem that has the potential to snowball.

People from all industries take part in shopping practices that put them at risk of accidentally buying counterfeits. This is especially true of customers in the designer fashion industry. 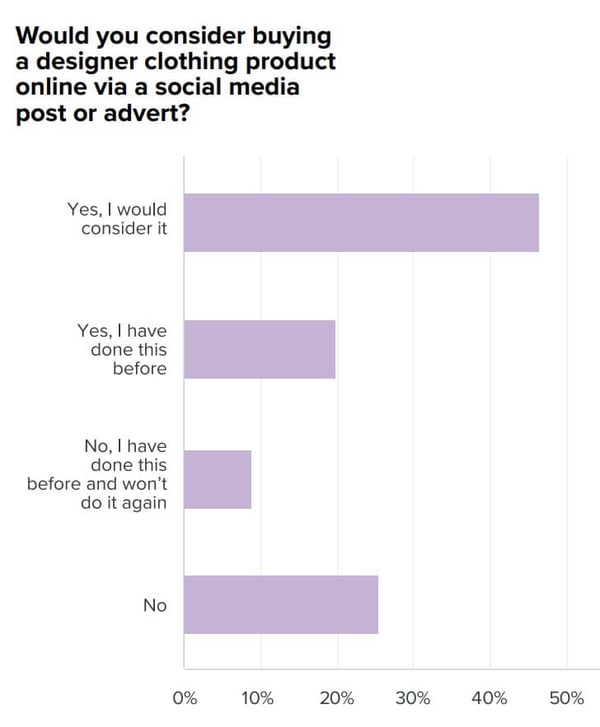 We’ve seen the growth of dangers to brands appearing on social media countless times, which is in large part due to the enormous potential customer base available to crooks, as well as privacy settings allowing counterfeiters to work in secret, and the anonymity of accounts that allows them to continually create new profiles. Not to mention Instagram’s apparent laid-back approach to allowing suspicious adverts on their platform.

On top of this, the research also found that when determining the authenticity for products online:

Despite product reviews and star ratings being the most commonly used factors for determining product authenticity, both of these have become unreliable methods in recent years. The expanding usage of bots online means that it’s easier than ever to generate huge amounts of fake reviews and to hugely influence star ratings on products - even on ones with a long history of satisfying customers.

The factors which specialists working in brand protection use regularly, and would recommend to customers and brands, are greatly underused by online shoppers.

Sellers of counterfeit products rarely have a full catalog of products, they instead tend to sell a small number of the highest selling products from a brand. Shipping location is useful since such a huge amount (80%) of the world’s counterfeits are manufactured in China, the nation is considered very high-risk to buy from online. Lastly, product price is an important potential signifier for fake goods. The old adage rings true for online deals: if it looks too good to be true, then it probably is.

Customers are looking for the real deal

Despite fashion shoppers using risky methods of verifying products online, our research has shown that consumers tend to own the authentic product. Compared to consumers of other industries, designer fashion aficionados are relatively unwilling to purchase and wear counterfeits. This view is backed by these statistics: 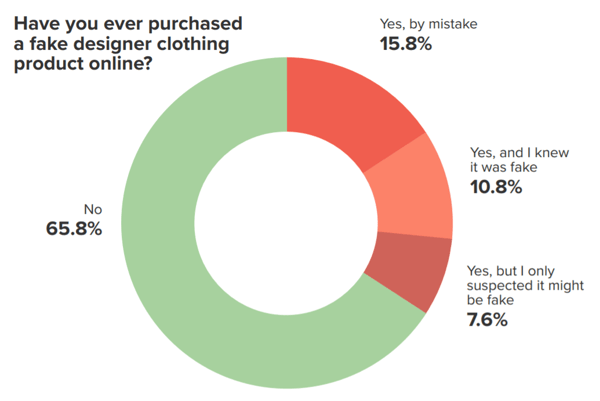 Users’ search intent when shopping online also mirrors the findings above. Only a small minority of respondents in Red Points’ research actually went online to look for designer fashion fakes. The clear majority were either looking to buy either an authentic product or an authentic product that looked similar, perhaps from a different brand. 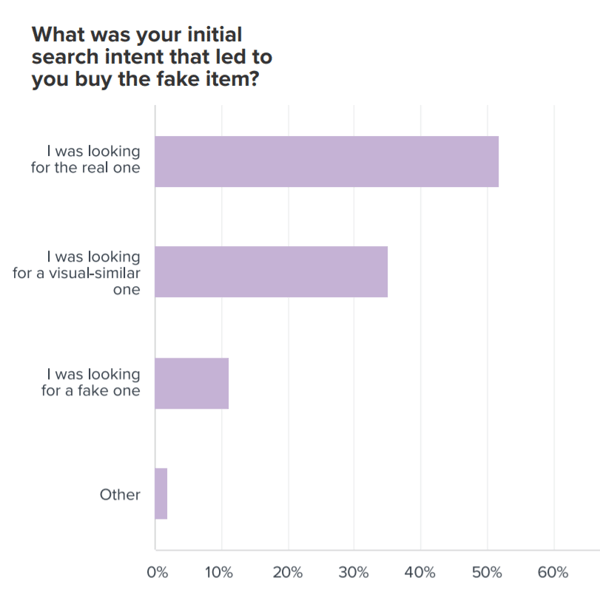 Though it’s clear that consumers of designer fashion products overwhelmingly do not seek out counterfeits online, the research shows that when people do receive a fake item, they are more satisfied with it than they may have previously expected.

The results of this section should come as a huge red flag for brands. Out of all respondents who had bought a fake, 31% of them did so knowingly, while 67% were satisfied with the fake product they received. What this means in there is a considerable number of shoppers who are buying designer fashion fakes unintentionally, but are satisfied anyway.

These findings may point to the improving ability of counterfeiters to make high-quality counterfeits, known as super fakes. Many modern counterfeits are no longer just cheaply made knock-offs with a logo slapped on the article. Production methods and tools are becoming more sophisticated and more affordable, meaning counterfeiters have a greater ability to make fake products that satisfy consumers - even those shoppers intending to buy an original, authentic item.

Some clear implications can be found from this research. First off, the majority of designer fashion consumers are uninterested in buying fakes - so much so that even becoming aware of the presence of fake designer clothes can turn shoppers off from buying from a brand. However, those shoppers who have purchased a fake item by mistake have actually been quite satisfied with the fake item they received.

Risky search habits and counterfeiters’ improving ability to sell online will get more well-meaning designer fashion fans buying fakes, and possibly allow them to see they can get the same satisfaction at a much lower price.

If counterfeiters can work uninterrupted, your customers will either learn that your products can be bought as cheap alternatives on the black market, or will be hugely discouraged from the presence of counterfeits and will turn to other brands. To ensure that this doesn't happen, a strong intellectual property strategy and full knowledge on the matter must be prioritized by brands. 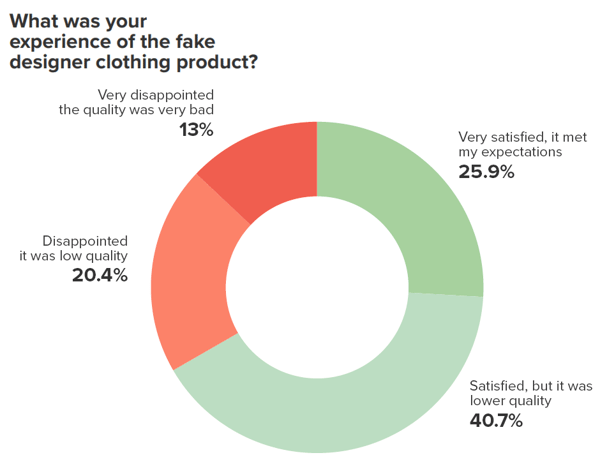 At the end of the day, allowing counterfeiters to work freely is a deeply troublesome situation for brands. Those consumers who find fakes online, or purchase one by accident will either be satisfied with what they receive, and will be more inclined to buy fakes in the future, or they’ll be disappointed with the product, and see the brand as unreliable and a risk to buy from online. 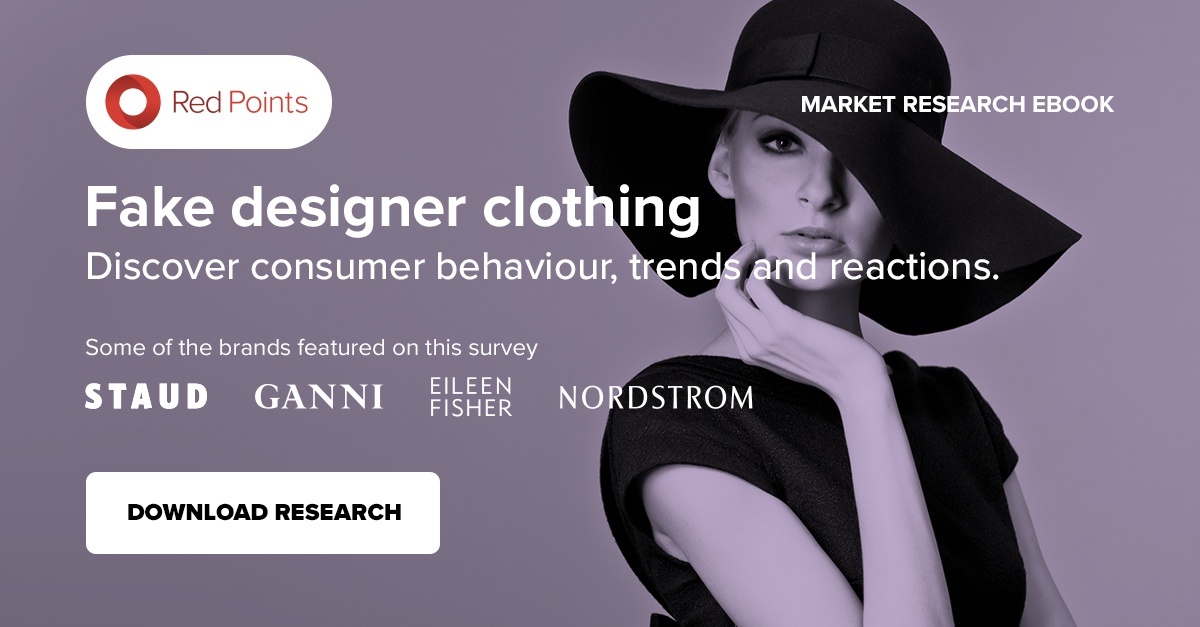