Dangerous counterfeit & illegal Halloween products that do more than scare

With over $7 billion spent every year on the festival, the scamble to produce halloween products leaves customers and business more than just scared.

Halloween is big business: last year Halloween spending reached almost $7 billion in the U.S. alone. Meanwhile in the UK, analysts estimate that people spent $546 million on Halloween, making it the second biggest “party night” in the calendar. With so much money at stake, it's of little surprise that there has been a significant rise in the number of cases of fake or illegal, unregulated products on the market. This has become especially prevalent in online sales, where it’s much harder to police and for consumers to check products. In the frenzy to buy one-off products from unknown brands, there is an opportunity for unchecked products to be sold to en masse to unsuspecting customers.

The scope of the problem

There are two main problem areas with this. One is customer safety, as products are not held to safety standards. Secondly there is an issue of copyright and IP, as organizations and individuals have paid for the sole right to produce costumes and products of certain characters/movies only to find that there are number of unlicensed counterfeit versions available online, usually for much cheaper.

A good example is American Horror Story: the Netflix series, as the name suggests, is all about creepy characters and dark stories. Halloween is the perfect time for copyright holders to maximise their merchandising opportunities.

One of the most popular characters Twisty the Clown has a three official masks produced by Trick or Treat Studios. Trick or Treat Studios is a prestigious costume company that usually works closely with the special effects and costume departments in the actual productions, they hold the licence for big shows such as Game of Thrones and The Walking Dead. The company produces three versions of the “Twisty the Clown mask” of varying prices. They sell these on their website, owned Amazon accounts and official third-party sellers. While some third party sellers like  Purecostumes.com have a list of their licenses, it’s very difficult to tell for a consumer if a product is genuine. A quick search on Amazon will produce a number of costumes and masks that are clearly unlicensed. Although some are clearly of better quality than others, you can see below the comparison between the real product (right) and fake (left). 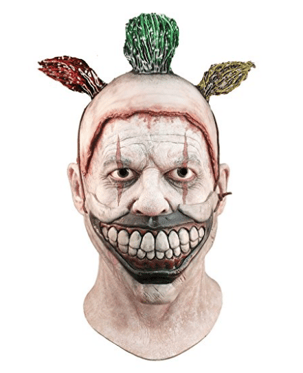 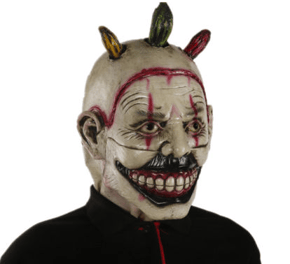 Creepy it may be but official it is not. This trend continues for almost all of the major movie and TV  franchises: Deadpool, the Avengers, Star Wars all have unofficial costumes available online. For customers unless there is a stark difference in quality, like the above mask, it’s very difficult to tell whether a product is official or not.  An unlicensed or uncertified costume may not have been held to high safety standards during production, this is especially concerning when we consider that even products produced from well-known manufacturers are sometimes rejected as fire hazards.

Halloween product manufacturer and retailer Spirit has came under fire recently for selling products that do not meet Canadian safety standards even though they are not counterfeit, the Canadian Government has issued warnings to consumers buying Spirit products and requested bans on certain products from the company. If this is the case for a large manufacturer we can assume that fakes and other untested products are equally if not more dangerous.

More creative products have arisen in recent years, that pose a serious threat to the health of consumers. There has been a huge rise in demand for cosmetic contact lenses that give the wearer monster like eyes. These are illegal in the U.K. unless sold by a registered optometrist however they are widely available online. There has been a number of cases in recent years of people damaging their eyes from unlicensed contact lenses. The situation in the U.S. is a little different, consumers can buy FDA approved contacts however they must supply their prescription to the supplier. Recently, warnings have been issued to consumers, as there are many contacts available online that carry fake FDA approval logos, and require no prescription.

Other products also pose a threat, makeup and fake blood are some of the main causes of visits to the doctors post halloween. One such case found that fake blood which appeared genuine was uncertified and had not been tested. The costume blood caused burning and blistering on the skin, this was bought online from an unlicensed retailer.

How to identify counterfeits when shopping

For most people costume make-up is not a regular purchase and so it’s difficult to judge the quality and authenticity of products, which is concerning as a number of reports have found that counterfeit costume make-up may contain dangerous ingredients. However this problem is not new, high end cosmetics have been suffering from counterfeiting for a while. These fake make-up products appear genuine however have hugely inferior ingredients that pose a real threat to the wearer. Some counterfeit cosmetics have been found to contain bleach, lead and even mercury. In this article for Talko, the report lists 13 counterfeit cosmetic products that could cause serious harm.

Whenever there is lots of cash at stake over a short period of time there will always be those who seek to exploit this, leaving consumers and legitimate business to pick up the real cost. Learn more about the how the counterfeit market can be controlled with our free eBook offer:

Top 2020 brand protection events (and what happened to them)

Cybercrime: Which ones are the most common threats today?

The Day After COVID-19: Preparing for the future of ecommerce