Why leaked screeners and pre-release piracy are so dangerous

Pre-release piracy, or leaked screeners have plagued the award season in recent years. These illegal versions of films are made available before a film has been released in the cinemas and have the potential to damage box-office sales even more than traditional piracy.

Although the film industry boasted its most profitable year ever with Hollywood generating in excess of $11 billion, U.S. cinema attendance is a fragile thing and dependent on well-made attractive films to get people through the door. However, these same movies are the most at risk of piracy, especially during the award season. Screener leaks or any other form of pre-release piracy can devistate box office sales, with some studies suggesting that pre-release piracy can result in a 19 % drop in box office takings.

2017 appears to be no different to previous award seasons, a number of high profile films have had screeners leaked. One of the award season's favorites La La Land screener was leaked online during the film's release period. It's clear to all in the industry that movie piracy is not decreasing despite what many predicted with the advent of online streaming sites such as Netflix. Google received the same number of DMCA take-down requests for unauthorized content in first 6 months of 2016 as it did for the total of 2015; in fact the number of DMCA requests have quadrupled in the last two years. File sharing sites are also expected to increase in activity by 51% between 2014 and 2019. This means that a pre-release leak has never before been so damaging to sales.

There is a number of different formats of pirated movies. CAM rips are one of the most common early version available. A CAM rip means someone has secretly set up a camera during a screening or premier of a film but these tend to be low quality and have poor sound (as well as cinema-goers often moving about in front of the movie - highly annoying). DVD rips or Blu-Ray rips are of a very high quality, but usually pirates have to wait until after the cinema release for the DVD version to be available. However when a screener is leaked, pirates are provided with high quality DVD versions of the film sometimes long before the release date.

A screener or a DVDSCR is a copy sent to critics, journalists and industry professionals prior to the industry award season. These are sent out before the official release in order to allow designated individuals time to evaluate the film and ultimately to maximize the movie's chances of receiving an award and building critical acclaim for a profitable opening weekend.

Screeners are leaked because there are lots of opportunities to do so. Physical copies are mailed to individuals and signed for like any other package, so there’s naturally many potential weak points that can be exploited in this process. There are counter-measures in place, like placing a watermark on the film that is difficult (but not impossible) to remove. Watermarks or embedded code can show the designated recipient of the screener to identify where the leak has taken place. However, this has been proven to be ineffective when dealing with experienced movie pirates; the leak of "The Secret Life of Walter Mitty" had a watermark stating it was the property of Ellen DeGeneres, but this proved to be false and put in place by hackers.

In late 2015/16 a number of big budget films were leaked prior to their official U.S. release, due to stolen screener copies. The tables below show movies that had versions (not all screeners) leaked and the proximity to their release date. There are many more that don't feature in these short tables, these simply show the movies that were leaked the quickest.

In regards to big titles 20115 was a much worse year, however 2016 clearly had some big victims as well. For more  data there is a full list of movie leaks available and put together by waxy.org. It's important to mention that the dates are for the U.S. release and it is much worse when we consider that the release date can be up to 1 month later for markets such as Japan or Spain.

At Red Points we worked to protect The Hateful Eight in Spanish, which wasn't available in cinemas until the 15th of January. This meant that there were potentially 3 weeks where a good version of the film was available online but not in the cinema. Below is an infographic detailing just how many links we detected in that time and the outcomes. 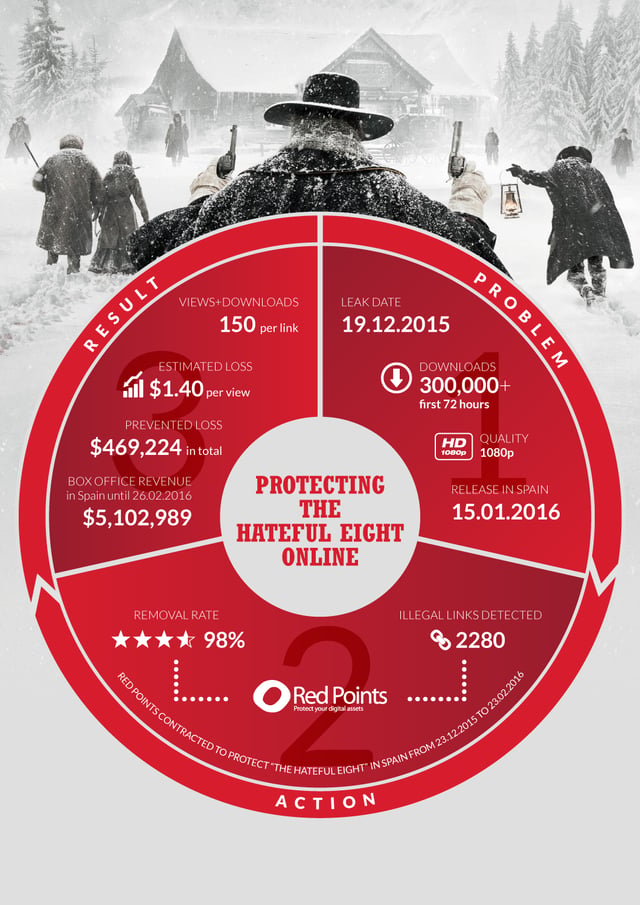 We believe that a film such as The Hateful Eight may not have suffered as badly as it could have due to its unique use of Panavision 70 lenses in filming, which give the film a very distinct viewing experience. Additionally, Tarantino has a large following of fans who would not consider watching a pirated copy. However the movie still had significant levels of piracy. The piracy group responsible issued an apology, but stated that they bought the DVD from a street vendor and that it was already widely available by the time they uploaded it. The FBI traced the source of the leak to Andrew Kosove, co-CEO of production-finance company Alcon Entertainment. He was sent the “screener” copy for review, however Mr. Kosove stated that he had never seen the screener DVD.

The impact of pre-release piracy is clearly huge and very difficult to quantify. However it's estimated that each person who watches a pirated version of the film costs about $1.40 in losses as approximately 70-80% of people viewing pirated versions would not pay full ticket admission to see the film in the cinema.

This is clearly negative for all movie creatives and professionals but it can be particularly damaging for smaller-scale TV or Independent films who used to request production funding from distributors. Jean Prewitt, President and CEO of IFTA, stated that “Spanish distributors used to finance through presales about eight to ten percent of independent film budgets. Since piracy invaded Spain, that percentage is now drastically reduced, frequently to zero.” (forbes.com)

Pre-release piracy is not always a case of hacking into a mainframe, in famous cases such as Sony; there are lots of elements of human error too. The good news is that, through movie streaming on secure channels the risk of released leaked movie screeners can be reduced significantly.

Case of demand and supply

There are many who claim piracy is simply a case of entities responding to an overwhelming demand for new movies. In what some academics are calling "generation free", they blame the online culture of Millennials and younger audiences who do not expect to pay for content. There are several arguments as to why this is, some state it is the ephemeral nature of streaming a film, the notion that as the user doesn't own anything, piracy doesn't affect the industry. Read more about Millennials and piracy in our industry report.